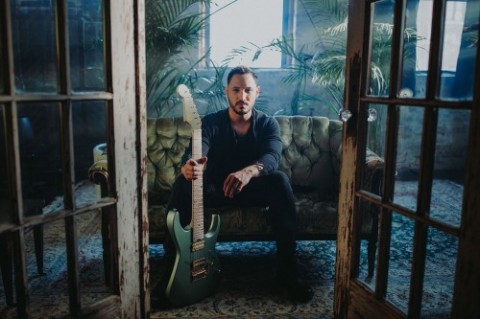 To say Angel Vivaldi knows a thing or two about guitar is an understatement. The axe genius has spent the better part of 17 years perfecting his craft to what it is today, and getting there meant overcoming several hurdles.

“I grew up with a lot of obstacles standing in my way of playing guitar, whether it was being very poor or having little-to-no support,” says Angel Vivaldi in an exclusive interview with Charvel. “Things like lessons and adequate gear were way out of the question. I spent a lot of time by myself just exploring the guitar, using my ear as a guide.”

Despite these setbacks, Vivaldi would soldier on and build an illustrious career in instrumental-prog rock with albums like Away With Words, Part 1 and Synapse. As his career blossomed, so did his need for an instrument that could keep up with his fiery fretwork.

“I remember playing with tons of different bands, some were in drop B and some were in drop C,” explains Vivaldi. “I couldn’t afford a guitar to play with each of these bands, so I figured if I had a 7-string I could cover all my bases. Sure enough, it did! Now it’s just become a huge part of how I riff and write.”

In early 2017, Charvel sent the guitarist a DK24 model to take for a spin. The guitar virtuoso immediately admired the classic-yet-unconventional approach Charvel took to crafting state-of-the-art instruments.

“I fell in love with the philosophy behind what Charvel does — breaking rules on traditional guitars,” says Vivaldi. “I found this philosophy really falls in line with my own philosophy of fusing modern-era guitar building with the blue prints of classic tradition.”

“To be honest, I didn’t expect to fall in love as much as I did,” continues Vivaldi grinning. “I was initially sent a 6-string DK24. The fact that I am a 7-string player who fell in love with a 6-string says a lot.”

This partnership would eventually spawn the Angel Vivaldi Signature DK24-7 Nova, an elegant 7-string guitar loaded with premium features and designed for an array of playing, from heavy metal riffs to articulate blues solos.

“The name Nova really represents so much of what I feel like this guitar stands for… which is driven innovation and creativity,” says Vivaldi of his signature model.

Watch the in-depth interview below, which includes a full rundown of the features on his signature axe as well as enticing playing snippets of his songs.