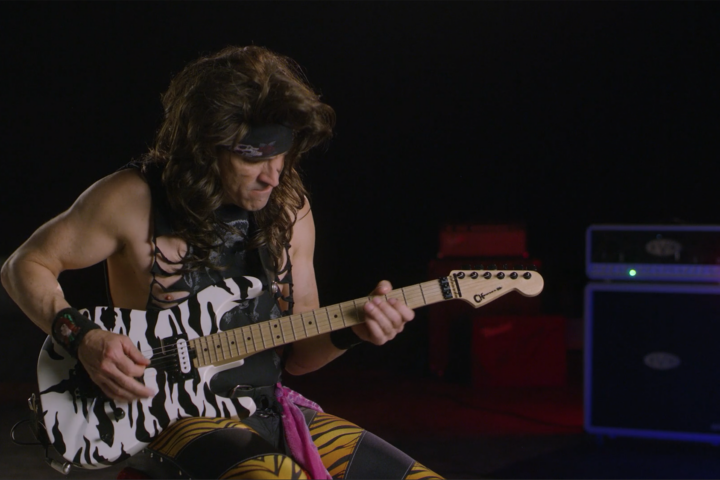 Proudly flying the neon flag of 1980s-era Sunset Strip glam metal with a healthy dose of satirical swagger, there is truly no band quite like Steel Panther.

Not only do they conjure the spirit of those wild and raucous times, they take pleasure in showing and telling anyone and everyone that they live it every day.

And as Steel Panther continues to conquer stages around the world with their explosive live shows, one of the many reasons for the fireworks is the expert fretwork of their guitarist Satchel.

Kitted out with features of the highest performance and, of course, a tiger-striped finish, this guitar sounds and looks like a massive metal machine.

For Satchel, his partnership with Charvel is a culmination of a childhood dream. Growing up in Redwood City, Calif., his musical journey actually started with the violin, but he eventually gravitated towards the guitar around the same time he saw Great White open for Judas Priest.

Crazily enough, it wasn’t even Mark Kendall or Glenn Tipton — guitarists for Great White and Priest, respectively — that piqued his interest in that moment.

“There was a roadie who came out, and he checked the guitar through a PA, and it was so loud and so awesome,” Satchel said. “I sold my violin and I’ve never, ever looked back.”

A graduate of the Guitar Institute of Technology in Hollywood, Satchel was embedded in the scene, and played in several bands along the way, whether it was a slew of tribute acts or originals with the likes of Paul Gilbert and Judas Priest singer Rob Halford.

Through it all, Satchel had his eye on Charvel.

“The ‘80s were some of the coolest looking guitars of any generation,” he said. “A lot of animal print, a lot of awesome stripes and a lot of bitchin’ colors.

“So I got into Charvel from the awesome music. Some of my favorite heavy metal guitar players were playing Charvel, and they looked awesome.”

To add that flair to his namesake models, Satchel envisioned a Bengal tiger stripe in the Satin White finish, which some might say is reminiscent of a guitar used by Dokken’s George Lynch. But Satchel easily disputes that idea with science.

“Now, I know what you’re saying. That’s a zebra because it’s black-and-white, but it’s not a zebra. It’s actually a Bengal tiger.”

Satchel included a pair of Fishman Fluence Classic humbucking pickups that share a single volume control knob with a special push-pull dual voice activation. The push/pull knob allows the player to access both the standard humbucker sound and an entirely different voice with boosted mids, perfect for switching between rhythm and leads.

“The Fishman Fluence pickups are the best sounding pickups I’ve ever heard,” he said. “I was blown away by their versatility.”

The contoured Dinky body shape is ultimately playable whether sitting or standing, but Satchel is even more excited about the classic Charvel neck.

“I don’t know how they got it down so early, but they were always at the top,” he said of Charvel’s necks. “It feels like it feels natural. You’re not fighting it. You don’t wanna feel like you’re fighting the guitar neck. You want it to feel like butter.

“It makes me happy that a kid that’s gonna buy an actual model anywhere in the world is gonna get a killer neck … and it’s going to be the same neck that I’m playing on stage.”

With a tour on the horizon and venues opening up globally, Satchel is ready to take his newest  signature model to the masses and keep carrying the metal torch as only Steel Panther can.

“If Steel Panther didn’t exist, the next generation would be lost,” he said. “They would have no direction in life, and heavy metal might be lost in general.

“But we’re bringing back part of the ‘80s that is so important to the future of mankind. If we weren’t here, there would be a hole that could not be filled by any other style of music, for the rest of all time.”