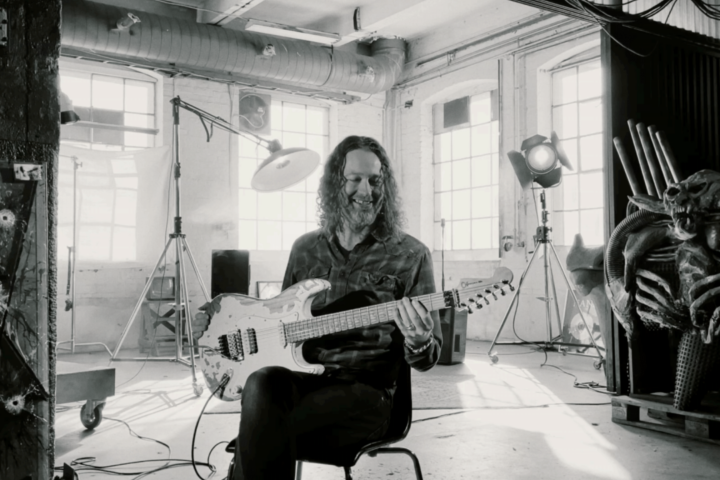 When Henrik Danhage was around the age of 5, little did he know that his grandfather might have changed the course of his life with a single album.

Grandpa gave a young Danhage KISS’s 1975 live album, Alive!, and the bombastic leads of guitarist Ace Frehley on classic tracks like “Strutter” and “Rock and Roll All Nite” set this unassuming Swedish boy on a wild musical journey.

Inspired by what he was hearing on that album, Danhage got his first guitar when he was 9 as a gift from his parents. To make things easier on his hands, Danhage’s father even cut off the strings so he could just stand in front of the mirror to emulate what he heard on the albums.

“I was in front of the mirror pretending I was Ace Frehley, and some of the best guitar playing I ever did was during those two years,” he said with a laugh.

The strings came back though, and the real work began. He began diving into the catalogs of ‘70s guitar virtuosos, including Steve Vai, Eddie Van Halen and Yngwie Malmsteen with designs of learning how to master the instrument as these heroes did — even if he had to come up with proprietary techniques.

“These high-energy guitarists really made me feel special in my heart,” said Danhage. “I realized that I’m not going to spend all the time learning their stuff, so I started coming up with my own little tricks instead.

“It took a little longer, but it made me find my own voice in the guitar, which now I am very happy for.”

By the time he was 12, Danhage had some chops, enough so that he was called to join a local band called Penicillin that had access to a rehearsal studio for two hours a week.

Eventually, Danhage got a call from Tom S. Englund, frontman for Swedish power metal band Evergrey, in 2001. There was a need for a new axeman, and Englund thought Danhage was the man for the job.

Danhage’s first Evergrey record, 2001’s In Search of Truth, is generally regarded as one of the best progressivle albums of all time, thanks in large part to his singular approach to riffs and rhythms.

While he took a break from Evergrey in 2008 to focus on other projects, Danhage found his way back to the band in 2014 and was a main contributor to metal standouts Hymns for the Broken through 2022’s A Heartless Portrait (The Orphean Treatment).

And to pay tribute to Danhage’s lasting impact on the metal world, he collaborated with Charvel on the limited-edition Henrik Danhage Signature Pro-Mod So-Cal Style 1.

A total high-performance machine, Danhage’s namesake model fits the vision that he first dreamt of as a teen looking at old ads in Guitar World magazines from the ‘80s.

“It was a fantastic ad with a bunch of other guys – Vinnie Vincent, Jake E Lee, of course Steve Vai – standing there with super cool custom guitars, badass clothing, big hair, and it just woke something in me,” he admitted. “To this day, this is one of my biggest inspirations.”

The first thing that stands out about Danhage’s signature model is the relic finish – the only relic finish in the entire Charvel lineup.

Its ash body’s White Relic is heavily distressed, calling back to the years Danhage spent on the road with Evergrey.

“I’ve always loved worn guitars,” he said. “For me it is perfect. I don’t really have to be careful with guitars on the road, or anywhere. I can just throw it in the car, and it looks cool.”

The reverse headstock is a callback to the first guitar he ordered on his first-ever custom Charvel guitar, while the pickups feature a rare combination of a Seymour Duncan JB TB-4 humbucker in the bridge position and a DiMarzio Area 67 in the neck position to offer both blistering metal attitude and shimmering clean tones.

“I love a combo of Seymour Duncan and Dimarzio pickups,” he said. “It can give me everything – from the brutal stuff to the really clean, beautiful, wonderful nice stuff.”

From the expressive Floyd Rose 1000 Series double-lLocking tremolo bridge system to the 12”-16” compound radius  fingerboard and reliced maple neck, Danhage believes this guitar not only represents where he is now as a metal maven, but also the journey that got him to this point.

“Sitting here now all these years later with my own signature guitar in my hand, it’s amazing,” he said. “Charvel nailed all the stuff that was on my original one – both the looks and the feel of that one.

Watch Danhage discuss his musical journey and share more details about his sig Charvel in this exclusive video package below.