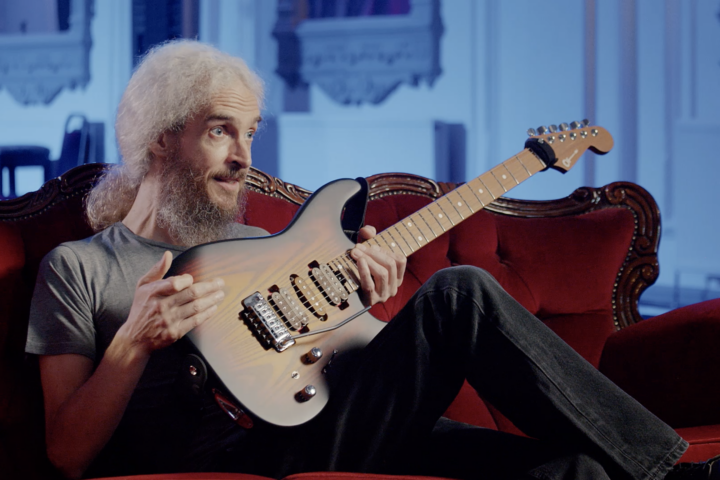 Whether it’s his solo work, his sonically diverse collective The Aristocrats or his collaborations with the likes of Steven Wilson and Hans Zimmer, Guthrie Govan is known as one of the most skilled guitarists in the world.

The U.K. virtuoso is truly a master of all genres, deftly skirting between rock, jazz, prog, metal, classical and everything in between while somehow making it sound 100-percent unique to him.

His technical prowess and other-worldly feel is the result of decades of devotion to an instrument he first picked up as a young child.

“I was 3 years old when I started playing, but it wasn’t really a conscious choice,” Govan said. “It was a case of growing up surrounded by music being played in the house and seeing a nylon string guitar propped up in the living room.

“So, it was the most natural thing in the world to start learning how to operate the thing.”

This early exposure to music sparked a personal journey to absorb anything and everything he could to refine his craft and make it a career, which was aided by his 1993 crowning as “Guitarist of the Year” by Guitarist magazine.

Various projects ensued, including the formation of The Aristocrats (featuring Brian Beller on bass and Marco Minneman) in 2011 and a three-album stint with Wilson, an acclaimed English progressive writer and producer.

Throughout his musical journey, the guitar has served as his main creative tool.

“You end up on this quest to find an instrument that feels as natural as possible,” said Govan. “I think it’s a good goal to not be aware of the instrument and make it more of an extension of yourself, and then you can concentrate purely on what kind of noises you’re trying to make and share with the world.”

With the latest iteration of his signature Charvel San Dimas, Govan feels that he’s found the perfect playing partner.

“Can you hop on the airplane with one guitar confident that it will be able to deliver whatever the people on the other end would need?” asked Govan. “This is a different flavor.”

Harkening back to the ‘80s Charvel models that were manufactured exclusively in Japan, it also meets his high standards of excellence.

“I’ve been to Japan many times, and the thing that strikes me constantly is how much everyone cares about doing things properly,” Govan said. “It’s an assurance of quality, and this thing is immaculate.”

As his new namesake guitar is released to the public, Govan hopes that others will pick it up and feel like he did when he was learning guitar as a kid. Perhaps he can inspire another virtuoso who will change the guitar game in the near future.

“Teenage me would be really happy to know that one day I would end up with a signature guitar,” he said. “But this also comes with a kind of responsibility.

“I have a guitar now that I am completely confident to take anywhere in the world and do any kind of gig with.

“Anyone out there who has heard the kind of thing I do and the way I blend different styles or the way I need to access different tones, if that’s something that resonates with you, I can only cordially invite you to try one out. Should you find one of these in the wild, who knows, you might just like it!”

Check out all the specs of the Guthrie Govan Signature MJ San Dimas SD24 CM here.