As I Lay Dying Returns with ‘Shaped By Fire’ 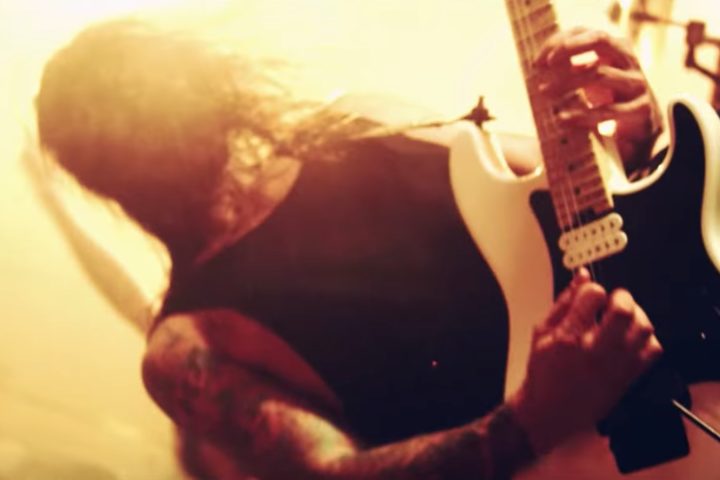 Metalcore band As I Lay Dying made a roaring return to music with the Sept. 21 release of seventh studio album Shaped By Fire, which includes the headbang-worthy title track and the scorching new single “Blinded.”

“The chorus for ‘Shaped By Fire’ really sums up a lot of what is going on the album lyrically,” noted singer Tim Lambesis in a behind-the-scenes interview.

“To me, being shaped by fire is an easy to understand metaphor, so I felt like it’s a great title,” he explained. “Beyond being easy to understand, there’s depths when you dig deeper you understand the need for transformation. Transformation is a painful process, and ‘Shaped By Fire’ talks about taking those painful moments of our lives and using them to transform.”

The video for “Shaped By Fire” starts off with the guys playing in a warehouse before an elderly man becomes engulfed in flames to reveal a small boy in the ashes. Guitarist Phil Sgrosso riffs on a Charvel Pro-Mod So-Cal Style 1 HH FR E as the boy grows into a man only to burn again and repeat the renewal process.

Shaped By Fire proved to be a mammoth undertaking, with the guys getting back into the groove of writing as a band after the lengthy hiatus while also dividing time between producing the record and touring new music

“As we were working on the writing processes [for Shaped by Fire], we decided we would split up the recording to two separate sessions, so the timing and planning would work,” said Sgrosso. “So pretty much half and half, tracking guitars, vocals and bass. We had to go back and forth with between which mentality we were in. Were we in tour mode or were we creative mode? But I think, overall, we were able to get it all done. It was about, from start to finish, a complete year of working on this record.”

“Blinded,” the latest offering from the album, paid tribute to the band’s loyal fan base.

“The whole idea was to have a band-fan interactive video with it getting progressively more intense to emphasize the connection we have with our fans through music,” said lead guitarist Nick Hipa.

Click the links to watch the intense videos below, and catch As I Lay Dying on tour in support of the record here.