Falling in Reverse Kick Off Tour in Los Angeles 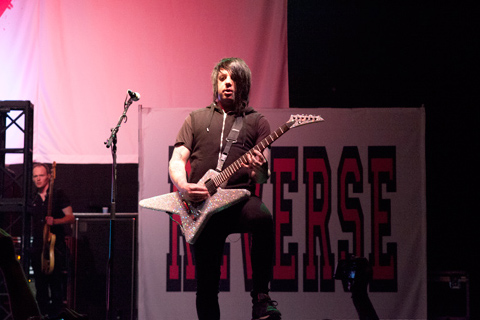 Falling in Reverse decided to call their current run of shows with Escape the Fate the “Bury the Hatchet Tour,” and Wednesday night’s kickoff at Los Angeles’ Wiltern Theatre certainly embodied that sentiment.

Not only did both bands deliver killer sets, but FIR frontman Ronnie Radke closed out the evening by performing two songs with Escape the Fate, marking the first time he’d shared the stage with his former group in over six years.

That joyous moment was met with wild cheers, as Radke and the guys from Escape the Fate tore through “Not Good Enough for Truth in Cliché” and “Situations” before the lights popped on inside the historic venue.

Before that, however, Radke and Falling in Reverse nearly blew the roof off the Wiltern.

An enthusiastic crowd chattered in anticipation while the crew set up Falling in Reverse’s gear, a din that only increased as a black curtain was slowly lowered to obscure the band’s entrance.  Once it rose, a pair of white risers flanked drummer Ryan Seaman, whose kit sat atop a video screen that displayed graphics and song titles throughout the concert.

Up first was “Rolling Stone,” which comes off their 2013 album Fashionable Late.  Immediately, those watching from the pit in front of the stage either raised their phones to take pictures of the spectacle or began to dance wildly.  Most did both.

Falling in Reverse followed that with “I’m Not a Vampire,” a hit off the band’s 2011 offering “The Drug in Me is You.”  That caused an all-out singalong and even more dancing, especially during guitarist Jacky Vincent’s screaming solo.

Five songs in, “Sink or Swim” brought out the band’s hardcore roots, with a breakdown that had everyone violently banging their heads to Radke and guitarist Derek Jones’ throaty growls.

Riding the momentum of that one, Radke then called for a circle pit for “Goodbye Graceful,” another aggressive track.

Radke addressed the crowd midway through the set, noting how excited he was to start the tour in L.A. (with a nod to the city’s notoriously bad traffic).  With applause raining down from the Wiltern’s upper levels, Falling in Reverse then launched into “Bad Girls Club,” the latest single off Fashionably Late.

Not only did “Bad Girls Club” have everyone shouting all the words, all the females in the house participated in the “Hey Mickey”-esque call-and-response bridge much to Radke’s delight.

After a two-song encore of “Alone” and “The Drug in Me is You,” it was time for Radke to rejoin Escape the Fate for the big ending.

It’s not known whether Radke’s guest spot will close every show during the month-long tour, but it was clear that the fans in Los Angeles felt lucky to be the first to see it. 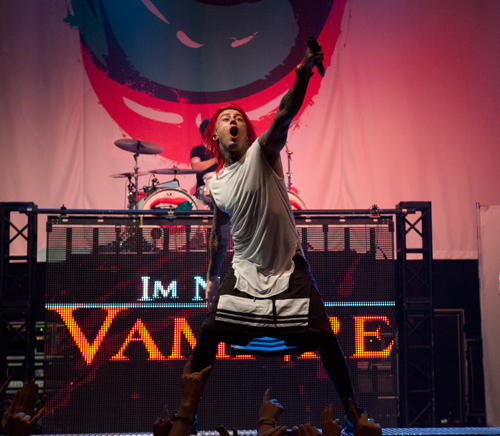