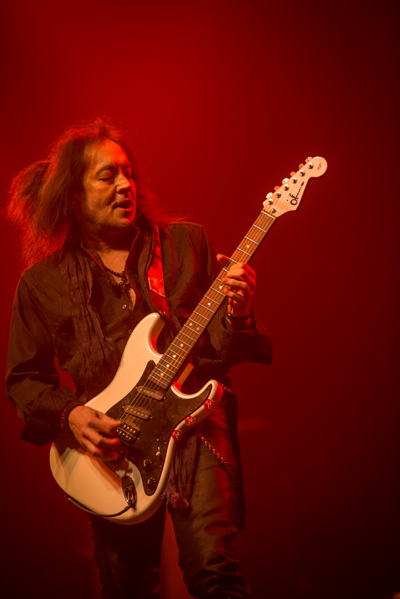 Over the past few years, the NAMM Jam has hosted some of the most talented artists in an event that is always called the hottest ticket at the NAMM Show.

This year’s concert was no different.  The buzz for the NAMM Jam built throughout the week, and as the concert at the Grove in Orange, Calif., neared on Saturday night, it was clear that it was going to be tough to gain access.

And rightfully so, as the crowd was set to witness the exciting progressive stylings of Guthrie Govan and the Aristocrats and Periphery, and to also see legendary guitarist Jake E Lee in action after a lengthy hiatus.

Lee’s new band Red Dragon Cartel has been touring in support of their self-titled debut album, which is an excellent showcase of his blues and hard rock background.  In addition, the prospect of viewing the former Ozzy Osbourne guitarist perform “Bark at the Moon” was the topic of constant chatter.

Things started off with Jake Allen, a late add to the bill, but a welcome one, for sure.  Allen’s inventive and original sounds blend rock, jazz and progressive music.  The fact that he achieves those sounds as a fingerstyle guitarist make Allen all the more impressive.

Allen, whose latest record is called Etherica, seized the audience’s attention by plucking away at this acoustic guitar, working his way up and down the frets and slapping its body for added percussion.

Then it was time for the Aristocrats, the technically mind-bending trio consisting of Govan, bassist Bryan Beller and drummer Marco Minneman.  Govan explained the union of a Brit (Govan), a German (Minneman) and an American (Beller) as part of the reason for the title of the band’s sophomore studio album Culture Clash. 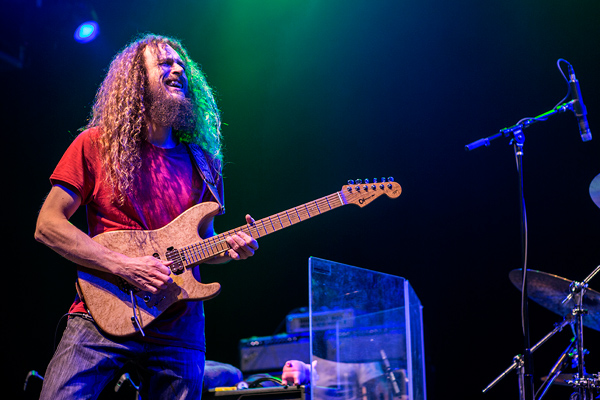 The band was expertly tight all evening, and the collective atmosphere of the group shone through with each song.  There was one that Minneman wrote that challenged traditional blues concepts, and another one – “Louisville Stomp” – that Beller said sounds like the theme to the popular 1990s cartoon Ren & Stimpy.  Funny thing is, Guthrie’s rambunctious guitar in “Louisville Stomp” kind of does recall the show’s intro.

Periphery was up next, carrying the flag for the djent movement in progressive metal with an amazing instrumental performance.  For this D.C.-area group, the three-pronged guitar attack of Misha Mansoor, Jake Bowen and Mark Holcomb put forth an aural assault that bassist Adam Getgood and drummer Matt Halpern complemented with their aggressive rhythm section.

Following a 30-minute interlude by the always-provocative Johnny Coffin Fashion Show, in which L.A. fashion designers focused on an “Ode to Motorhead” theme, it was time for Red Dragon Cartel.

Coming out dressed in all black with his long hair tied in a topknot, Lee was hot from the beginning.  Not only did Red Dragon Cartel pull out several gems from their new album like “War Machine,” “Shout It Out” and the latest single “Seether,” but they also paid homage to Lee’s tenure with Osbourne and Badlands.

“I’m very, very lucky to do this song,” singer D.J. Smith said before launching into a stirring version of Badland’s “In a Dream.”  For that one, Smith was joined only by Lee’s soulful guitar as he plaintively sang, “In the morning I awake, and I’m blessed by God’s grace, just to open my eyes, see your face.”

The band also played Badland’s “Rumblin’ Train,” with Lee wringing every bluesy note out of his guitar.

For the big finale, Lee broke into his famous riff for “Bark at the Moon,” the iconic Osbourne track.  Several shouts of approval came from the crowd, as camera phones popped up to capture Lee doing what he does best.

The invitation-only NAMM Jam also gathered together many other musicians who were at NAMM, including Machine Head’s Phil Demmel, Chris Broderick and David Ellefson of Megadeth, Letlive’s Jeff Sayhoun, Wes Hauch and Michael Keene of the Faceless, and Bleeding Through’s Dave Nassie; among others.

And with all that star power under the Grove’s roof, the NAMM Jam continued its status as a must-see event. 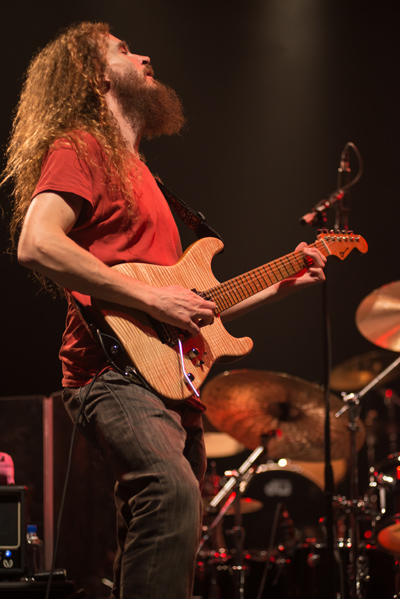